The Insurety alliance managed to retain the consolidated GWP in 2020 to within 6% of the 2019 GWP result. This is a pleasing performance when taking into account the expected large reductions in volume of business due to the pandemic and the extremely complex economic environment.

Furthermore, if we consider GWP figures together with Exposure figures, this result seems even more impressive. Exposure in the alliance decreased approximately 19% from end of 2019 to end of 2020.

This highlights the efforts that the teams have been putting in to reducing exposure and increasing premium rates across the alliance.
Special mention goes to Lombard Guarantee, probably operating in the most uncertain environment out of the three alliance members. As you may see in the graph below, Lombard Guarantee reduced its exposure by 29% in EUR terms (some differences may relate to forex). However, its GWP only reduced by 14%.

Nevertheless, the efforts from the Nordic Guarantee and Assetinsure teams also deserve to be mentioned. Both were forced to change strategies due to external circumstances.

Nordic Guarantee’s travel book was extremely exposed to the effects of the pandemic. The team had to make the difficult decision of putting the book in run-off.

Assetinsure received external pressures to increase rates in a market where the rest of competitors were not modifying their rates substantially. Despite the fact of having tough conversations with their clients, the team managed to protect the relationships. 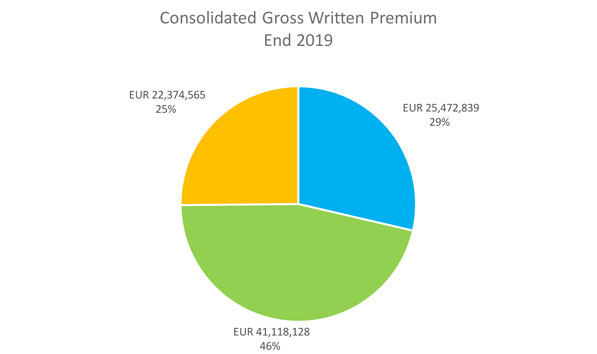 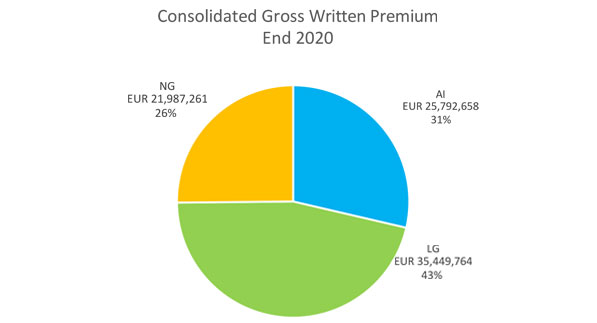 During 2020 Lombard Guarantee continued to be the largest revenue contributor to the alliance. However, we can see how Assetinsure and Nordic Guarantee increased their relative contributions.

As we commented earlier, revenue at the consolidated level has decreased, with the biggest decrease being registered in the construction book.

Many of our other product segments have also suffered the consequences of the pandemic, either due to a decrease in volume of business or due to mitigation practices in segments where an increase in risk was perceived.

Going into the 2020 year our expectations were that we were going to experience material losses in most portfolios, following the strain that the Covid-19 lockdown restrictions would have on already stressed economy and South African businesses. To date, this has not appeared to be the case and our loss ratios across the division have been better than expected.
Trade Credit increased their expected loss ratio for the 2020 underwriting year to 110%, however because of the proactive measures implemented during the year they have been able to reduce the loss ratio to 70%.

General and Commercial raised large reserves in anticipation for calls on cash strapped clients. Fortunately, there have been no material claims to date and in fact their recoveries received for claims paid in the prior year, have exceeded the claims paid in this financial year.

One of Construction’s key strategic focus areas this year was to maximise recoveries on large losses previously paid and to mitigate any further losses. Materialising the Group 5 recovery was a key objective and we are very pleased that the full gross loss of R630m was received, as well as a further R46m in interest and R8m in expenses.
Other significant recoveries of R107m were received during the year.

The Moncada claim (relating to underwriting year 2012) is in the process of being concluded with the sale of shares agreement being concluded. All parties have signed the agreements, CPs have been met, Competition Commission approval has been granted and the process is going through the last formalities. The transaction is expected to conclude and cash of R91m is expected to flow by the end of May 2021. This amount will take the total recovery to R 124m.

The result on claims for the year 2020 was far better than the expectations considering the estimates which were prepared during the Q1 2020 after the outburst of the global pandemic. NG ended up well below both the revised forecasts and the budgeted claims costs for the year. The result is obviously an indicator of the underwriting work done during the previous years but also an achievement from the claims team of Nordic Guarantee.

The biggest immediate concern from the early days of year 2020 was related to the exposure which NG had on the travel industry and the travel bond portfolio. The decision to withdraw from the industry was implemented during the year and we ended up having more than double the claims costs on travel book compared to what was budgeted. However, these came from small operators so the overall impact on the result was moderate as the budgeted gross claims costs ratio for the travel portfolio was 15 %. The larger exposures which we had from the Nordic operations of Thomas Cook and TUI did not materialize into claims during 2020. The Thomas Cook portfolio was successfully transferred under a new owner at the end of 2019 just before the pandemic. We will continue to monitor the remaining exposures from the travel industry as we go forward, but so far the measures taken on the travel portfolio have proven to be working.

The claims from the construction segment stayed below the budget and forecasts. We did not see an immediate impact based on the revised economic situation due to Covid-19, but we anticipate that we may see a delayed impact on the claims costs during the next couple years. There are some significant salvage and mitigation projects pending such as Pallas Rakennus Oy in Finland where the total exposure for the group was EUR 17 million in the end of year 2020. The team in Finland is working closely with the group and the owners in order to salvage the company and avoid losses from the guarantees issued on their behalf.

There were no material or major claims to speak of during the year and we ended the year with a gross claims ratio of 21%.

The strategy of the claims handling in NG has been focusing on the increasing the proactivity. This includes among others the mitigation and salvage efforts as well as the cooperation with the underwriters combined with the active approach towards the beneficiaries and principals. The strategy has led to quicker turnaround in the claims handling process as well as improved accuracy in the claims reserving process. During 2020 there were several claims cases where the strategy was successfully implemented in all different geographical jurisdictions of Nordic Guarantee.

When covid hit our shores in mid-March 2020 we really didn’t know what to expect. We braced ourselves for potentially an uptick in Claims experience across the portfolio. Thankfully to date, the initial economic downturn experienced (with a recession in Australia in 1st half of 2020 – our first for almost 30 years) was short-lived with a strong rebound in the 2nd half of 2020. Construction activity in Australia and New Zealand was deemed an essential service and effectively insulated the sector from prolonged delay and shutdowns.

Accordingly the Claims performance (and therefore the overall financial performance) for Assetinsure’s Surety division was quite strong. Whilst we did incur a number of relatively sizable claims our recovery actions in 2020 were quite successful and due to the timing with further expected recoveries still being received we should see further writebacks in the 2021 results.

In December 2019 a significant claim was made on a Grocon maintenance bond for the full amount of $9.4m. After a court process we paid $5.2m and during 2020 we made a full recovery. A further bond claim, on Grocon, was received and paid for $3.65m. We entered a repayment arrangement and have received $1.2m to date. We anticipate to make a full recovery. Over 2020 we successfully managed down our exposure by over $30m with constant discussion and negotiation with our customer and their Principals allowing us to achieve a good result overall.

On Christmas Eve 2019 an ASX market announcement indicated Decmil was facing some significant challenges with the resignation of the CFO, significant downward revaluation of a key asset and a dispute with the NZ Dept of Corrections on a significant project (NZ Prisons).

In March two separate bond calls were made on the Sunraysia Solar Farm (SSF) project totalling $165.6m and shortly thereafter a demand was received for $NZ 4.3m on the NZ Prisons project. This meant we had almost $20m in claims with our customer unable to pay us back. The company managed to raise new equity and refinance itself and after negotiations we improved our position, taking a secured position. A repayment plan was also negotiated which will allow us to be fully repaid by May 2021.To date we have been repaid more than $11m with the balance to be received over the next two months.

During the 2020 year we also had a small number of claims that were immediately recovered. One of the more significant was $4.6m (relating to LD’s) claimed on a Canadian Solar Limited project. The Renewable Energy sector in Australia has created issues for contractors and given the issues in the Renewable space with projects in Australia we made a strategic decision in 2020 to not issue any new bonds on Renewables projects.

The claims on Southstar Homes (Residential builder in Victoria) ultimately cost us $4.1m with a small recovery offsetting the bonds claimed.