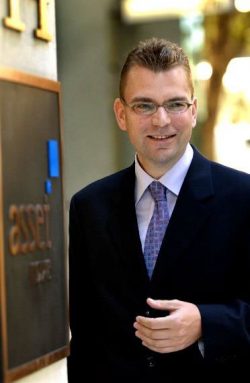 After 17 years in executive roles for the Assetinsure Group, Gregor Pfitzer will resign as CEO as at 31 December 2020 and step down from the boards of the Group.

The decision has been reached by mutual agreement. Gregor will assist in a smooth transition through to the end of February 2021 when the year-end process for the companies of the Group will essentially be completed.

Martin McConnell will take over as CEO w.e.f. 1 January 2021. Martin joined Assetinsure in 2011 as head of the Financial Risk Business and has been a member of the Executive Committee for nearly two years.

He has built a highly successful business and has proven to be a seasoned leader with broad experience in the financial services industry. Reporting lines to the CEO remain as they are now.

The board and shareholders have expressed their gratitude to Gregor’s dedication and achievements over the many years. “The company was a start-up in 2003 and the business has gone from strength to strength under his stewardship”, says Johnny Symmonds director of Assetinsure and of Lombard Australia Holdings, the parent company of the Assetinsure Group.

“After a great deal of reflection, I have come to the conclusion that it is time for Martin to take over and for me to move on” says Gregor. “We have experienced turbulent times, but the situation has now stabilised to the point where I feel comfortable to make a change. I still have some years ahead of me and the time to become involved in something else. I am not exactly sure what that will be yet, but I am pursuing a few options.”

Insurety and its member companies; Nodic Guarantee, Lombard Insurance and Assetinsure have experienced teams who are experts in Mining Rehabilitation guarantees.

Changes in Management of Insurety and Alliance Members

The Insurety alliance has long recognized the value of positive change from within. We have decided to make the following changes to our management structures on the back of a successful 2020 for Insurety and its alliance members. Johnny Symmonds, currently CEO of Insurety, will adopt the role of chairman of Insurety and he will... View Article